Age Like any art collector’s piece, the older it is, the more valuable it becomes. There is a distinction between antique and “new” – those made after the 1930s. A carpet made at a workshop of a well known master weaver will obviously be more expensive than one made in a regular workshop. Some of the names sought by the international auctioneers Christie’s and Sotheby’s are Kashan Mohtasham, Tabriz Haji Jalili, and Laver Kerman. 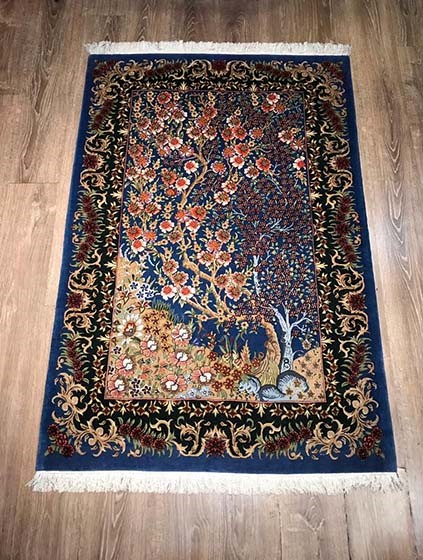 Colour A good carpet will have a diverse colour palette, with a strong contrast between the colours – no one wants a dull carpet. Buyers should ask the dealer whether it is made from natural dyes – from fruits, vegetables or mashed insects – or modern manmade chemical dyes.
Material The price of a carpet will also be determined by the type of material used, usually silk, imported or domestic, or wool, imported or domestic. Carpets made of Manchester wool, produced in the northern English city of the same name, have appreciated extremely well, says Ali Al Bayaty, the chief executive of Estuary Auctions in Abu Dhabi. Rug commissioners in Iran stopped using Manchester wool, bringing an end to carpets made of expensive imported wool, after the Great Depression when British and German companies defaulted on their commitments to Iran.
Weave The fineness of the rug is determined by the number of knots per square metre. A coarse rug could have 36,000 to 50,000 knots per square metre, whereas fine or rare rugs could have more than 1 million knots per square metre.

The effort to produce a work of such staggering beauty was so immense that his family hosted parties for weeks and exchanged elaborate gifts to celebrate its completion.
The Paradise Garden, a 160 square metre Persian rug that can only fit in a palace, features more than 90 shades of colour and is decorated with the Shah Abbasi Flowers pattern , which originated in the 15th century. But it is more than just a rug.

The carpet, made in the weaving centre of Tabriz city in north-west Iran, has been a backdrop to the struggles of Mr Hossein-Zadeh’s Iranian rug trading business, which he has operated in Abu Dhabi since the early 1970s. Whatever was happening in the region, in the business, even in the world, the dream carpet was always there.
There was the opening of his branch in Abu Dhabi, the Iranian Revolution, cash disputes with the weavers and a two-year hiatus when the project was completely halted, not to mention rounds of international trade sanctions with Iran and other geopolitical tensions.
At every stage of manufacture, it is almost as if the dream carpet represented Mr Hossein-Zadeh’s prosperity and that of his business.
And for the millions of knots tied to weave the beautiful and intricate rug there is a similar number of business deals struck between traders of the UAE and its Iranian neighbour.

For many years Dubai has been a re-export hub for Tehran for goods including fruit and nuts, cars and carpets. Trade between the UAE and Iran between 2005 to 2009 tripled to US$12 billion (Dh44.07bn), according to figures from the Dubai Chamber of Commerce and Industry. Re-exports to Tehran jumped 29 per cent to $31bn last year, according to Reuters.
Even as sanctions tighten over Iran’s nuclear ambitions, trade remains and so, too, does Mr Hossein-Zadeh’s dream carpet, which today is kept under lock and key until the right buyer is found.
“There were times when my father wondered why he even began that project, but by then he had invested so much money that he just had to complete it,” says Dawood, Mr Hossein-Zadeh’s son, who was a child when the carpet was envisioned and an adult, married with children, by the time it was completed.

Dawood, who has taken over the century-old family business and runs the Centre of Original Iranian Carpets in Abu Dhabi, says the rug, kept in the family private collection, is for sale at Dh4.4 million.
On one of Dawood’s walls hangs a collection of old framed photographs of Sheikh Zayed and several notable UAE Royals, along with portraits of Queen Rania of Jordan, and King Mohammed of Morocco standing behind piles of carpets laid out in the company shop.
“In this kind of business, very one-of-a-kind, rare pieces of the finest Persian rugs, you are dealing mostly with royalty wherever you are. Who can afford to buy them? Only the rich, ultra-rich and VIPs,” says Dawood.
Persian rugs, once the passion of Ottoman Caliphs and European monarchs, have long been coveted by Middle East families, not just as decorative floor coverings but as assets to be sold in times of economic hardship.
The price of a Persian rug has increased by 40 per cent in the past 12 months as Iranians inside Iran pour their money in carpets as a haven to hedge against the rapid devaluation of the local currency and subsequent rise in inflation.
“Merchants are trying to concentrate on fine, rare antique carpets by 19th century masters to buy to re-import them to Iran,” says Ali Al Bayaty, the chief executive of Estuary Auctions based in Abu Dhabi.
“Most of the rare pieces are in Europe and [Middle East and North Africa] region, while bazaars in Tehran are only selling ‘new’ pieces, by new we are talking about 1930s.”
“These carpets are currently in high demand. A lot of these pieces have wear and tear and need to be washed and maintained, and the best workshops are still in Tehran,” Mr Al Bayaty adds.
It’s the opposite of the days of the 1979 revolution, Dawood says.

“When the Pahlavi was toppled, Iranians who wanted to leave rushed to buy carpets because they were not able to transfer currency abroad. When they left the country, they sold them in Beirut, Damascus, Dubai and other Gulf states to get money, and the whole international market became flooded with carpets making the prices fall. Those were difficult times.”
And today he is facing a different set of challenges as sanctions hit Iran’s economy.

“Antique rugs from Iran are becoming more expensive and as the economic situation gets worse, you have to pay more to encourage these workers to stay in the field,” says Mr Hossein-Zadeh.